Archbishop of Detroit & The Romanian Orthodox Episcopate of America
Consecrated to the Episcopacy on November 15, 1980
Patron Saint Feast Day celebrated on April 22 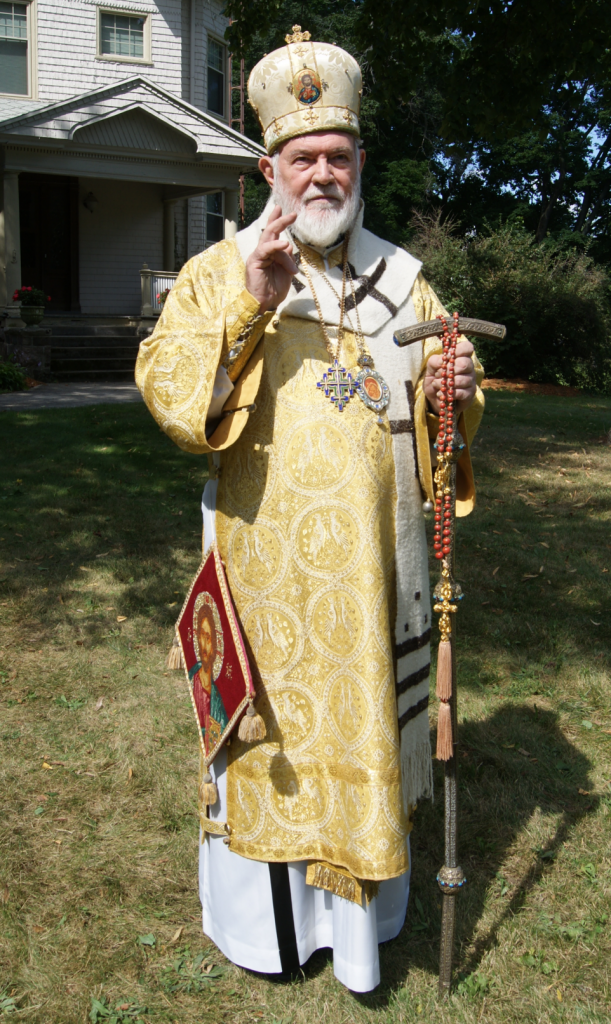 His Eminence, Archbishop Nathaniel (Popp) was born in Aurora IL, in 1940, to a family of Romanian heritage (County of Satu Mare) who attended the Saint Michael the Archangel Romanian Greek-Catholic Church in Aurora.  Having gained from his experiences at Saint Michael’s a desire to serve the Lord as a priest, he attended Saint Procopius College, a Benedictine-operated liberal arts school and “Pontifical Eastern Rite Center” in Lisle IL.  Called to Rome, Italy, by the Romanian Byzantine Rite Catholic Bishop Vasile (Cristea), he studied at Gregorian University and resided at the Greek College of Saint Athanasius.  While there, the rituals, canons, and practical spiritual life of the Byzantine Rite were learned and lived with students from Greece, Lebanon, Syria, Calabria, and Sicily.  He was also witness to the workings of the Second Vatican Council (1962-1966).  During his stay in Europe, he visited extensively in Greece, Germany, Italy, and had the mysterious and powerful encounter of Mount Athos.  His comment at this time was, “If only the monks were not Orthodox!”  Actually, his first visit to an Orthodox church was at this time.  The spirituality deeply moved him but the interior conflict of history and loyalty to the “Unia” made him keep Orthodoxy at a distance.  It was on Mount Athos that one of the spiritual fathers “bestowed” on him his name of “Nathaniel.”  Having completed his studies, he was ordained into the Holy Diaconate on July 17, 1966, at Colle de Tora, “San Anatolia” summer chapel of the “Collegio Greco” by Bishop Cristea, and on October 23, 1966, he was ordained into the Holy Priesthood in the Romanian Uniate Church “San Salvatore” in Coppele, Rome, by the same hierarch.  In January of 1967, he returned home and was appointed Assistant Priest of his home parish, Saint Michael.

The spirituality, theology and call of Orthodoxy, which had been dormant, began to beckon and within a matter of months, he laid aside the Unia and sought entrance into the Orthodox Church.  At this time, his practical knowledge of American ecclesiological realty was unknown to him.  Having left the Aurora parish, he visited with classmates from Rome who had also embraced Orthodoxy and were serving in various “jurisdictions” in North America.  Through Fr Vasile Haţegan of New York NY, then Cleveland OH, he was introduced to Archbishop Valerian (Trifa) who worked with him to be received into the ranks of the clergy of The Romanian Orthodox Episcopate of America (ROEA).  He fully embraced the Orthodox Faith in the Chapel of “The Nativity of the Birthgiver of God,” Vatra Românească, Grass Lake MI, in the presence of Archbishop Valerian on February 15, 1968.  For several years, he resided in a small monastic community on the Vatra property until he was appointed rector of Holy Cross Church in Hermitage PA.  An author of numerous articles, speaker, and lecturer, he also taught at the summer youth camps of the diocese.  He was Confessor to the Sisterhood of the Holy Transfiguration Monastery and was instrumental in the founding of an “Inter-Orthodox” Women’s Association in the Hermitage area.  In April 1978, he was one of two representatives of the Orthodox Church in America (OCA) at the Conference on Monasticism in Cairo, Egypt.  He had been Spiritual Advisor to The American Romanian Orthodox Youth, an active member of the diocesan Liturgical Commission, Late Vocations Program, and Episcopate Council, and, among all these activities, he is also a painter of “icons on glass” (icoane pe sticla) in the Romanian peasant style and a collector of historical art and artifacts.

At the request of Archbishop Valerian for assistance in the administration of the expansive diocese, he was called to the Hierarchy by a Special Congress of The Romanian Orthodox Episcopate on September 20, 1980.  On the feast of the Transylvanian martyrs, Sofronie, Visarion, and Oprea, October 21, 1980, Father Popp professed the “angelic” vows (Little Schema) at the Vatra Chapel, taking the name of the Holy Apostle Nathaniel.  He was then elevated to the rank of Archimandrite.  His Consecration to the Episcopacy took place at Saint George Cathedral in Southfield/Detroit MI, on November 15, 1980.  The Holy Liturgy and Consecration were officiated by Metropolitan Theodosius, Primate of The Orthodox Church in America, assisted by Archbishop Valerian of Detroit and The Romanian Orthodox Episcopate of America, Bishops Kyrill of Pittsburgh (OCA-Bulgarian), Dmitri of Dallas (OCA), Christopher of the Eastern Serbian Diocese (Serbian Patriarchate), Boris of Chicago (OCA), and Mark of Boston (OCA).  He was installed the next day as Bishop of Dearborn Heights, with the Saints Peter & Paul Church there as his cathedral, and was named an Auxiliary Bishop for The Romanian Orthodox Episcopate of America.

He assisted the Archbishop in this capacity until 1984, when the latter retired and relocated to Portugal.  On Sunday, November 17, 1984, Bishop Nathaniel was enthroned at Saint George Cathedral as ruling Hierarch of The Romanian Orthodox Episcopate of America.  Since then, he has overseen the tremendous growth and expansion of the diocese (dozens of new missions/parishes, as well as monastic communities for women and men), carefully maintaining the Romanian tradition and integrating the many “newcomers” into American society, while at the same time recognizing the importance of a united Orthodox witness in this land.  He has remained at the forefront of the movement toward a united Autocephalous American Church.

His Eminence has served as the Episcopal Moderator for the Pastoral Life Ministries Unit of The Orthodox Church in America, Chairman of the V D Trifa Romanian American Heritage Center in Grass Lake MI, organizer of the “Help for Romania Fund” and co-founder of “Help the Children of Romania” in 1990, Chairman of the Congress of Romanian American (CORA) since 1991, President of the Board of The Center for Orthodox Christian Studies in Detroit, and Spiritual Advisor for the Orthodox Christian Laity (OCL).

In 1994, desiring to fulfill the longing to visit Romania, Archbishop Nathaniel made a pilgrimage to visit all parts of Romania.  In 1995, at the invitation of His Beatitude Patriarch Teoctist, he was a guest of the Patriarchate for the festivities celebrating 110 years since the Autocephaly of the Church of Romania and 70 years since the establishment of a Romanian Patriarchate.  In May 2003, His Eminence traveled to Romania where he was awarded an Honorary Doctorate from the University of Oradea in recognition of his leadership of the Romanian Orthodox community in North America and of humanitarian efforts in post-communist Romania.  Under his direction, the ROEA came to the aid of their brothers and sisters in Romania immediately after the fall of communism, and continue until this day to petition for their rights.  These are also times when the ROEA resumed a relationship with the Church of Romania, with His Eminence working for a greater understanding between the two groups.

He has been an active member of the Synod of Bishops of The Orthodox Church in America since his Consecration, and has represented the OCA in numerous events both in North America and Europe.  On Wednesday, October 20, 1999, in its Fall Session, the Holy Synod bestowed upon His Grace the elevation to Archbishop.