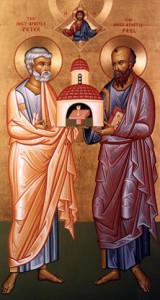 The Holy Apostles Peter & Paul are often depicted holding a church since they are considered “pillars” of the church for their teachings and the fact that they established numerous Church communities.

The Feast of Saints Peter & Paul

One may quite justifiably ask why these two apostles in particular are celebrated on the same day.  Peter was one of the twelve whereas Paul was not.  From the Biblical evidence that we have we know that Peter’s ministerial outlook was very different from Paul’s.  At the council of Jerusalem (48 AD), great problems had arisen in the Church from a large influx of Gentile converts and these saints had different opinions as to how they should be received.  Yet we find that not only are they celebrated on the same day, but even icons of Sts. Peter & Paul portray these two major apostles together with each other.

Historically, the reason why the Church combined the feast day of the two apostles into one was that they were both martyred in Rome and on the same day.  There is a very ancient tradition which claims that they were both executed during Nero’s persecution in approximately 68 AD. For this reason, probably from the fourth century onwards, the Church in Rome (where they were martyred) came to celebrate the feast day of these two apostles on June 29.  By contrast, Constantinople celebrated this feast day several days after Christmas on December 28.  (We see that it was the Roman custom that has prevailed in the Church today.)

Theologically speaking, the reason why the feast day of these two apostles was combined into one was to show that even though their ministerial vision was not the same yet both were necessary and even complemented each other.  Even though the Apostle Paul was not one of the twelve, he would claim, nevertheless that his ministry was considered equal if not superior to those ministers who had been appointed by Christ during His earthly ministry since he had suffered so much for Christ.  During their lifetime, these two great apostles of our Church disagreed greatly as to how to receive new members into the newly established Christian faith.  St. Paul is said to have rebuked St. Peter for duplicity in this matter.  In Galatians 2:11, St. Paul tells us of a disagreement he had with St. Peter: “when Peter came to Antioch, I withstood him in the face because he was to be blamed.”

Peter believed that new members firstly had to fulfill the requirements of the Jewish law by being circumcised before they could become Christians whereas Paul was totally opposed to this.  What we can learn from this is that when the Church is ruled by the Holy Spirit tensions of this kind can be overcome.

Their Life and Time

St. Peter originally called Simon was born in the strongly gentile town of Bethsaida but had a home in Capernaum.  Both were lakeside towns and this gave Peter the possibility to work as a fisherman.  Unlike Paul who was highly trained in the Jewish law, Peter was not; he was married and was accompanied by his wife on his missionary journeys.  After Pentecost, it was Peter who became the chief spokesman, principal preacher and administrator of discipline in the newly established Christian faith.

St. Peter is portrayed as the courageous apostle, full of life, spontaneity and dynamism.  He rejected Christ three times and cried bitterly for this but also confessed him as the Messiah, the Son of the Living God.  He is the one whom Christ asked if he loved Him yet also called satan.  However, the greatest characteristic of the Apostle Peter, so sensitively noticed by Archbishop Stylianos of Australia, was St. Peter’s sincerity to proclaim publicly and without shame that he was so unworthy to have Christ perform miracles for him.  In the gospel of St. Luke we read that as St. Peter saw Christ coming towards him after Christ had miraculously filled his nets with an abundance of fish, he said to Christ: “Go away from me Lord; I am a sinful man!” (Lk 5:8).  Who else would have dared to make a confession of this kind?  Who else would have thought that he is the least of all, and unworthy even of such an abundance of fish when so many other fishermen would have encountered similar hardships.  All too often if we know influential people we try to see what favors they can do for us without thinking that there may be others around us who have more need.  And it is this image of St. Peter, so full of humility, that must be recaptured again in the Church.

On the other hand we are told that St. Paul was born in the city of Tarsus, a thoroughly Greek city in Asia Minor and was a Roman citizen.  In his early life, not only was St. Paul a Jew from the tribe of Benjamin, and a Pharisee, but also a staunch persecutor of the early Christian Church. In fact he had been given the official authority to direct a campaign against Christians.  From his letters and the book of Acts, we learn that a dramatic revelation experience, on his way to Damascus, called Paul to follow Christ as an apostle.  After spending his initial three years as a follower of Christ in Arabia, Paul went to Jerusalem to visit the apostolic community where he spoke to Sts. Peter and James.  It would be fourteen years later that he would return for the second time to Jerusalem for the Apostolic Council of 48 AD.

About 46 AD, he was commissioned by the Church in Antioch to undertake a missionary journey to Cyprus and Galatia.  St. Paul has come to be known as the prodigious traveler, having undertaken four extensive missionary journeys to Asia Minor, Greece (including Macedonia, Thessalonika, Athens, and Corinth), Rome and possibly as far as Spain with a circle of missionary co-workers.  It was during this time that he wrote his famous letters to the Romans, Corinthians, Ephesians, Philippians, Colossians and Philemon.  Falsely accused of violating temple rituals, he was arrested, imprisoned for two years by the governor Felix.  After being set free by virtue of his status as a Roman citizen, since citizens of Rome could not be punished for cases not involving the breach of statute law, he went to Rome and was sentenced to death under the Emperor Nero.

Perhaps one of the most intriguing aspects of St. Paul is that there are so many dimensions to his personality.  He himself wrote that: “I have become all things to all people, so that by all possible means I might save some” (1 Cor 22f).  It is St. Paul’s polytropic nature which certainly promoted the rapid spread of the Christian gospel.  We could conclude by stating that the true greatness of St. Paul lies not only in his polytropic nature but also the writings that he has left us, having influenced Christianity as no other man with the exception of Jesus Himself.

Other Resources on Saints Peter & Paul