Saints of the Kiev Caves Monastery 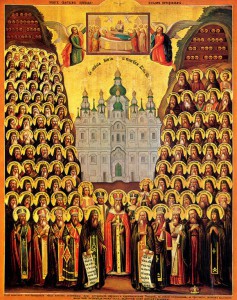 On the banks of the Dniepro River (also called “Slavutych”) in Kiev, the Capital of Ukraine, is the famous Monastery of the Caves in which repose the relics of many Venerable Saints. They are divided into the “Near Caves” of St. Anthony and the “Far Caves” of St. Theodosius, the two founders of the monastic community.

The Saints of the Kiev Caves Monastery form the largest urban Choir of Saints anywhere in the world today. They are the Patrons of Kiev, Ukraine and the Eastern Slavic Churches.

The names of all the Saints of the Kiev Caves Monastery are far from known, as Metropolitan Ohienko wrote in his books on Ukrainian Saints. As the service to them states:

“The praises to all those, whomever are Your Saints, O Blessed One, recon them multiplied more than the very sands. But Yourself, O Master Christ, having counted out the stars and named all named, grant them our prayers…”

In addition to the incorrupt remains of dozens of saints, there are also 61 myrrh-bearing heads of unknown Saints buried with the Fathers of the Caves.