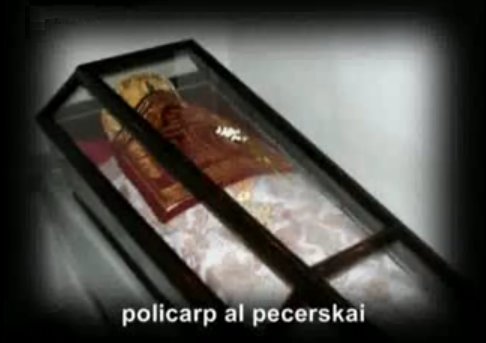 Saint Polycarp the Archimandrite entered the Kiev Caves monastery, where he received monastic tonsure and struggled for the salvation of his soul.

Soon, Polycarp (whose name means “much fruit”) began to bear fruits of repentance and virtue.Ā  His relative St. Simeon (May 10), who became Bishop of Vladimir and Suzdal, planted the seeds which St. Polycarp developed.Ā  As the holy bishop taught Polycarp the principles of the spiritual life, the two became increasingly united in spirit, just as they were related by blood.

When St. Simon left the monastery of the Caves to assume his hierarchal responsibilities in Vladimir, he took Polycarp with him.Ā  St. Polycarp wrote down the stories that St. Simeon told him of the God-pleasing ascetics of the Kiev Caves so that others might also benefit from them.Ā  Therefore, he is also known as St. Polycarp the Hagiologist. Ā  Although St. Polycarp returned to the monastery, he always tried to live according to St. Simeon’s instructions.

After the repose of Abbot Akindynus, the brethren chose Polycarp to succeed him as the Superior of the Lavra.Ā  This occurred during the reign of the Prince of Kiev, Rostislav Mstislavich, while John was Metropolitan of Kiev – the third of that name.

As head of the great Caves Lavra, St. Polycarp diligently strove to preserve the spiritual legacy and rule given it by Saint Theodosius.Ā  He was a skilful and diligent guide to the brethren in the struggle for salvation.Ā  Everywhere, they began to speak of the spiritual propriety and order in the Lavra under the abbacy of Polycarp.Ā  Many of the noble and famous princes came to him for advice and guidance, and many went away aroused and instructed in a life of virtue.Ā  Some of them even forsook their princely stations and worldly life in order to live in the monastery under his guidance.Ā  It is known that Grand Prince Rostislav Mstislavich, after receiving instruction from St. Polycarp, communed the Holy Mysteries every week, covering his face with tears of repentance for his sins.Ā  He often asked that he be allowed to become a monk.Ā  The saint told him, “God has appointed you to stand for the truth, to judge with justice, and to stand firmly before the Cross.”

The prince responded, “Holy father!Ā  One cannot be a prince in this world without falling into sin, and I am already exhausted and weakened by daily cares and toils.Ā  I would like to, at least in my old age, serve God and imitate those princes who have entered the narrow and sorrowful path and received the heavenly kingdom.Ā  I have heard the wish of Constantine, great among kings, who appeared from heaven to an elder and said, ‘Had I known what glory and audience the monks receive in heaven, how with wings of boldness they approach the Masterās throne, then I would have taken off my crown and royal purple, and replaced them with monastic attire’.”Ā  Hearing these words, St. Polycarp said, “If you desire this from the heart, may it be Godās will.“

However, as the prince was passing through Smolensk, he fell ill and asked to be taken home to Kiev.Ā  Seeing how weak he was, his sister Rogneda urged him to remain in Smolensk and be buried in the church they had built there.Ā  Rostislav would not accept this suggestion.Ā  He said, “If I do not make it back to Kiev, then let me be placed in the church my father built in the monastery of St. Theodore.Ā  If God delivers me from this illness and grants me health, then I vow to become a monk at the monastery of the Caves under Polycarp.”

As he lay at death’s door, Rostislav said to the priest Simeon, “You must answer before God since you hindered me from being tonsured by the holy one in the Caves monastery, for I truly desired that.Ā  May the Lord not count it as a sin that I did not fulfill this.”Ā  Thus, the prince received a blessed demise.Ā  The basis and cause of the highly virtuous life of this prince was St. Polycarp, whose divine instructions and especially his living personal example, acted upon the princeās soul.Ā  The saint not only attracted the monastic brethren by his example toward virtue, but also guided secular people to the path of salvation.

St. Polycarp peacefully reposed on July 24, 1182.Ā  After this, no successor was chosen for a long time.Ā  There were many worthy elders in the Lavra, but, from humility and meekness, none of them would accept the abbacy.Ā  As a result, a great grief and sorrow arose amongst the brethren, for they all understood that such a great flock should not remain without a shepherd.Ā  Therefore, on a Tuesday, at the ringing of the bell, the brethren gathered in the church and began to pray about the need.Ā  They called upon the Lord, His most pure Mother, and Sts. Anthony and Theodosius, and their newly reposed abbot, St. Polycarp, to reveal to them if he (Polycarp) had been pleasing to God, by indicating a person to fill his place as abbot.Ā  Then, something wondrous happened.Ā  There rose up a voice from among the brethren, “Let us go to Basil, the blessed priest in Shchekovitsa; let him be our abbot and rule the Caves monastery in a monastic rank.“

The monks went to the widowed priest Basil and asked him to be their abbot, but he refused for a long time.Ā  After many entreaties, he finally agreed and went with them to the monastery.Ā  He was tonsured as a monk and installed as abbot by Metropolitan Nicephorus of Kiev, Bishops Laurence of Turov and Nicholas of Polotsk.Ā  Abbot Basil proved to be a model of virtues and a worthy successor to St. Polycarp.