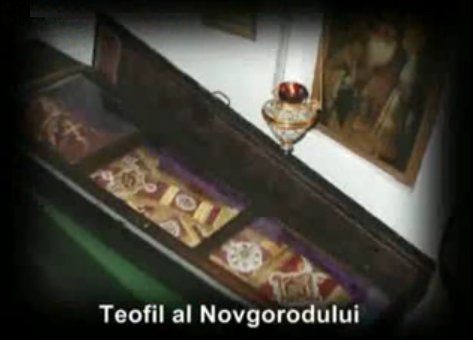 Saint Theophilus of the Kiev Far Caves and Archbishop of Novgorod, was chosen by lot after the death of the holy Hierarch Jonah (November 5).Ā  He was elevated to the dignity of Archbishop of Novgorod on December 15, 1472, in Moscow.Ā  Until his elevation, he had pursued asceticism in the Otensk monastery.

It was a very difficult time for the prelate to shepherd his flock.Ā  The governor of the city, Martha Boretskaya, and her partisans aroused the people against Great Prince Ivan III of Moscow, while the monk Pimen, a friend of the Boretskyās, sowed hatred toward the archbishop.Ā  Some of the rebels wanted to place Novgorod under the protection of Lithuania, and betray the sovereign.Ā  They were ready also to waiver in the faith of their forefathers.Ā  “Do not betray Orthodoxy,” St. Theophilus told them, “for I will not be a pastor to apostates, but I will return to the humble cell from which you brought me to this disgraceful rebellion.“Ā  (This letter of disavowal of the saint, written in 1479, is preserved.)Ā  The short-sighted people did not heed the words of the pastor, and a fratricidal war broke out between Moscow and Novgorod.Ā  The defeated Novgorodians were compelled to beg for mercy, and many of them owed their life to the intercessions of the saint.

In 1478, he tried in vain to convince the Tsar to lift his siege of the city, but Ivan kept in place until, at last, he was able to enter the city and take it.Ā  On January 19, 1480, Theophilus was removed because of slanders, and was sent as an exile to the Chudov Monastery near Moscow.Ā  In 1485, the saint became extremely ill.Ā  While he lie ill, St. Niphont of Novgorod (April 8), who is buried in the Kiev Caves of St Anthony, appeared to him in a dream.Ā  The saint reminded him of his promise to venerate the Kievan wonderworkers, telling him that the days of his life were short and so he must hurry to fulfill his vow.

Thereupon, St. Theophilus set out for Kiev even though he was gravely ill.Ā  When his party had arrived at the Dniepr, however, he received a revelation that although he would not reach the Caves alive, his body would rest in them.Ā  This was fulfilled.