The Holy, Precious & Life-giving Cross of our Lord, Jesus Christ 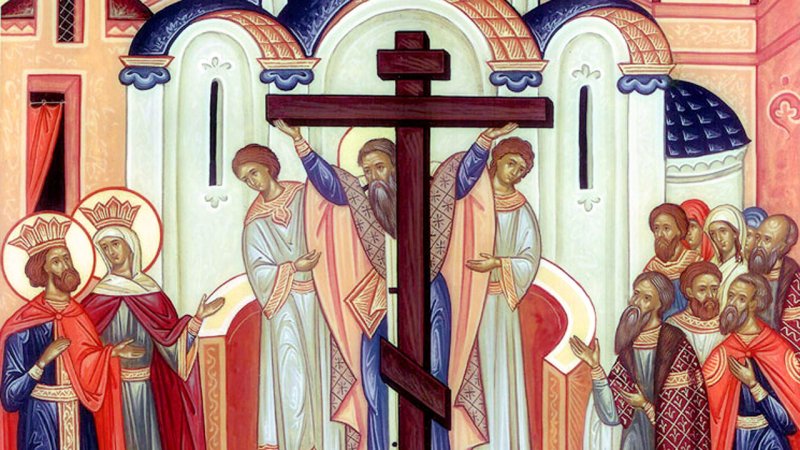 Inside this beautiful pectoral reliquary cross is contained a small piece of the Cross on which Christ was crucified.Ā  It was given to the parish in the early 1990’s by an elderly parishioner who received it from an uncle in Romania many years prior.Ā  Over the centuries, on rare occasions, it is known that the Patriarch of Jerusalem has given such crosses, with a relic of the Cross inside, as gifts.Ā  For example, Patriarch MIRON, the first patriarch of Romania, had received a similar cross.

Written in French around the frame of a very small enameled icon of the Nativity of Christ, are the words “Jerusalem, Mother of Churches”.Ā  The inscriptions on the cross, written in Greek, read: “In this conquer” and “In the year 312”, in reference to (Emperor) St. Constantine’s miraculous vision of the Cross and subsequent conquering of the Roman Empire, thus liberating Christians from persecution.

St. Theodore the Studite, who lived in the 9th century, preached in a sermon:

How precious the gift of the cross, how splendid to contemplate!Ā  In the cross there is no mingling of good and evil, as in the tree of paradise: it is wholly beautiful to behold and good to taste.Ā  The fruit of this tree is not death but life, not darkness but light.Ā  This tree does not cast us out of paradise, but opens the way for our return.

This was the tree on which Christ, like a king on a chariot, destroyed the devil, the lord of death, and freed the human race from his tyranny.Ā  This was the tree upon which the Lord like a brave warrior wounded in hands, feet and side, healed the wounds of sin that the evil serpent had inflicted on our nature.Ā  A tree once caused our death, but now a tree brings life.Ā  Once deceived by a tree, we have now repelled the cunning serpent by a tree.Ā  What an astonishing transformation!Ā  That death should become life, that decay should become immortality, that shame should become glory!Ā  Well might the holy Apostle exclaim: Far be it from me to glory except in the cross of our Lord Jesus Christ, by which the world has been crucified to me, and I to the world!Ā  The supreme wisdom that flowered on the cross has shown the folly of worldly wisdom’s pride.Ā  The knowledge of all good, which is the fruit of the cross, has cut away the shoots of wickedness.

The wonders accomplished through this tree were foreshadowed clearly even by the mere types and figures that existed in the past.Ā  Meditate on these, if you are eager to learn.Ā  Was it not the wood of a tree that enabled Noah, at God’s command, to escape the destruction of the flood together with his sons, his wife, his sons’ wives and every kind of animal?Ā  And surely the rod of Moses prefigured the cross when it changed water into blood, swallowed up the false serpents of Pharaoh’s magicians, divided the sea at one stroke and then restored the waters to their normal course, drowning the enemy and saving God’s own people?Ā  Aaron’s rod, which blossomed in one day in proof of his true priesthood, was another figure of the cross, and did not Abraham foreshadow the cross when he bound his son Isaac and placed him on the pile of wood?

By the cross death was slain and Adam was restored to life.Ā  The cross is the glory of all the apostles, the crown of the martyrs, the sanctification of the saints.Ā  By the cross we put on Christ and cast aside our former self.Ā  By the cross we, the sheep of Christ, have been gathered into one flock, destined for the sheepfold of heaven.